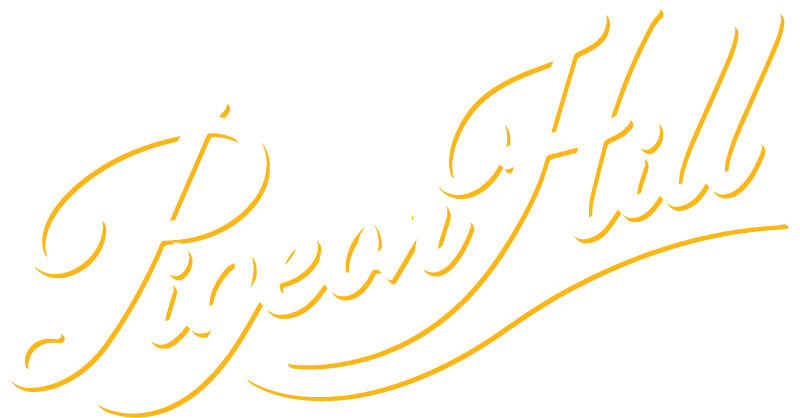 In 2014, Pigeon Hill Brewing Company opened our doors in downtown Muskegon with more elbow grease than capital, and more determination than experience.  As a testament to our love of Muskegon and its history, our taproom became a living museum, with lights from historic Muskegon foundries, tables built from lumber era pine, and decorations celebrating Muskegon and its rich brewing history.

For two years, the original taproom also served as our sole production facility, where our small 3.5 barrel (110 gallon) brew system ran at capacity to serve our thirsty patrons and provide limited kegs to local bars.  As demand for our beer increased both in the taproom and throughout the region, we took a leap of faith and purchased a vacant building one block away.  This building, a former Brunswick test facility, won our hearts with its history and character – and its ability to house a much larger production operation.  Two years after opening our taproom, production commenced on our new 20 barrel brewhouse at 441 W. Western, and we made the transition from small local brewery to a proud exporter of Muskegon beer throughout all of Michigan.

Now, all Pigeon Hill beer is brewed in our new production facility one block off Western Avenue in downtown Muskegon.  More importantly though, our production facility also now houses our taproom, which we call “The Brewer’s Lounge at Pigeon Hill.”  Here, you can enjoy a pint and see where all of the magic happens!

The massive sand dune known as Pigeon Hill was located on Muskegon Lake, near the channel.  According to legend, the hill was over 300 feet tall; from the top, you could see Lake Michigan and all of Muskegon.  During the late 1800s, Pigeon Hill became a popular tourist attraction, bringing visitors from across the state.  Originally known as the “Bluff at Port Sherman,” Pigeon Hill received its lasting name because of the thousands of passenger pigeons that congregated near its peak in the 1800s.

In the early 1920s, Pigeon Hill was sold to a company that began the process of removing the sand for industrial purposes.   By the 1960s, Pigeon Hill had been reduced to a collection of sandy bumps.  In 2014, our team set out to resurrect Pigeon Hill and honor the memory of a long lost landmark, while striving to become a new landmark for Muskegon.

A MERRY BAND OF MISFITS.

From the beginning, Pigeon Hill broke the mold with our family.  In building our team, we focused less on experience and more on people who were as passionate as we are about Muskegon and beer.  From a self-professed “awkward” cheese addict to the home brewer who knew more about flooring than anyone else we will ever meet, many misfits came together to bring Pigeon Hill to life.

The eclectic group we gathered quickly demonstrated that the sum is greater than the parts, as our variety of personalities and skills flourished into a cohesive team.  Today, you will still find many of those first family members behind the bar and operating the brew house.  Although our family continues to grow with our company, one thing certainly stays the same – we are still just a merry band of misfits.

Joel, Chad, and Michael come from diverse backgrounds but we all share a common love: craft beer.

As a Certified Public Accountant, Joel possesses an otherworldly understanding of excel spreadsheets and a keen eye for business.  Chad’s years in lean manufacturing and design allow him to efficiently direct production, maximize space, and – most importantly – make excellent beer.  Michael, a “liquor lawyer” who loves playing in photoshop, navigates the bureaucratic red tape while guiding our sales and drawing pretty pictures.

We were just three regular guys with a dream.  That dream became Pigeon Hill.

Where and how to reach us